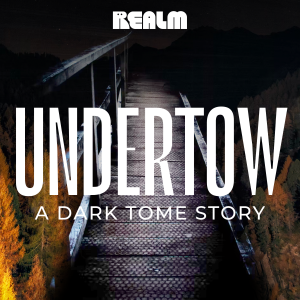 Reporter Tony Baxter returns to his childhood home of Simpson Falls with an axe to grind, determined to root out corruption. But his sleuthing of the Malleus Corporation’s investment in the town leads him down a dangerous path, where his own unresolved trauma lies in wait. Joined by friend and fellow lost soul Sonia Proud, Tony must confront the tragedy that shaped him deep in the New England woods— but if they aren’t careful, the malevolent forces in Simpson Falls won’t let them escape.

The Dark Tome Undertow is an original audio movie created by Fred Greenhalgh.

The Dark Tome: Undertow features the talents of:

Directed and Produced by Fred Greenhalgh.

Feat. the songs “Little Lorrie” and “Mesquite Street” by Carolyn Kendrick and the song “I Own the Road” by The Don Campbell band, used by permission from the artists.

Land Acknowledgement: The Dark Tome: Undertow was produced from lockdown with distributed performers across continental North America, in locations traditionally stewarded by numerous Indigenous tribes. The home base of Dagaz Media is in York County, Maine, ancestral land of the Wabanaki Confederacy. The fictionalized location of Simpson Falls, Maine, is inspired by the Penobscot County region of Maine, the ancestral land of the Penobscot Nation, the oldest continuous government in the world.

Special Thanks to Christopher Reynaga and the Point Mystic Podcast, Emily Burnham, and Mary Sangiovanni.

The Dark Tome is a Dagaz Media Production.

Behind the Scenes of Dark Tome Undertow

What fun we had collaborating with actors all across the United States. Welcome to the new world of decentralized recording (with hours of painstakingly designed real-world sounds to give it that sense of authenticity). This project was recorded completely remotely and utilizing union talent under a SAG-AFTRA New Media agreement.