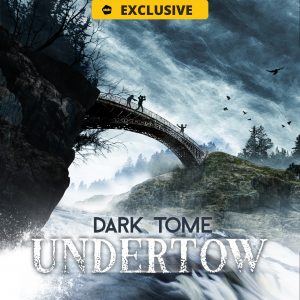 UNDERTOW takes place 18 months after the end of Dark Tome Season 2. As the world tries to reconcile the inexplicable occurrences in Simpson Falls, Maine, Simpson Falls native and investigative reporter Tony Baxter, is called on assignment.

But as Tony starts to dig underneath the surface, he finds the subject of the story is soon on him, and the aftermath of a childhood tragedy he’s never fully reconciled. Tony is faced with an impossible choice, and he and his partner, photojournalist Sonia Proud, won’t be able to leave the town as they arrived.

Featuring over 40 actors, a full original score and recorded across the United States during lockdown, UNDERTOW is a slow-burn audio-horror thriller in the veins of 1980s Stephen King paperbacks.

The Dark Tome Undertow is an original audio movie created by Fred Greenhalgh.

The Dark Tome: Undertow features the talents of:

Directed and Produced by Fred Greenhalgh.

Feat. the songs “Little Lorrie” and “Mesquite Street” by Carolyn Kendrick and the song “I Own the Road” by The Don Campbell band, used by permission from the artists.

Lack Acknowledgement: The Dark Tome: Undertow was produced from lockdown with distributed performers across continental North America, in locations traditionally stewarded by numerous Indigenous tribes. The home base of Dagaz Media is in York County, Maine, ancestral land of the Wabanaki Confederacy. The fictionalized location of Simpson Falls, Maine, is inspired by the Penobscot County region of Maine, the ancestral land of the Penobscot Nation, the oldest continuous government in the world.

Special Thanks to Christopher Reynaga and the Point Mystic Podcast, Emily Burnham, and Mary Sangiovanni.

The Dark Tome is a Dagaz Media Production.

Behind the Scenes of Dark Tome Undertow

What fun we had collaborating with actors all across the United States. Welcome to the new world of decentralized recording (with hours of painstakingly designed real-world sounds to give it that sense of authenticity). This project was recorded completely remotely and utilizing union talent under a SAG-AFTRA New Media agreement.